The Sheriff is a villainous werewolf from "Fleas Release Me," an episode of Archie's Weird Mysteries.

In his first appearance in the episode, the Sheriff arrests Reggie for his prank which involved him dressed as a werewolf when there's a real one out on the loose all over Riverdale. However, later that night, the Sheriff was shown running under the cover of darkness in an area where Archie was out with Betty and Veronica, who accepted his apology for upsetting them earlier. At that moment, the Sheriff turned heel and transformed into a werewolf under the full moon; and later emerged and chased Archie, who later trapped him in the restroom. After breaking out, Archie barely escapes in his car.

Fully unaware of his lycanthropic nature, the Sheriff agrees to take in Reggie after he believes that he is the werewolf. While in jail, Reggie asks the Sheriff about his hand, to which he explains about how he was bitten by Chaney's "dog," which was actually a wolf. He also reveals that he had Reggie's letterman's jacket (which he had on in his werewolf form) and was looking to return it, but he couldn't remember what happened next. It was at that moment that the full moon appeared and revealed the Sheriff's heel persona, as he transformed and went after Reggie. Archie and Jughead entered the station, where they encountered the evil werewolf Sheriff, and it is at that moment that Archie places his silver necklace around the Sheriff's neck, which caused him to revert back to his human form. After learning that he is a werewolf, the Sheriff thanks Archie for the necklace, stating that he'll keep it on always.

The Sheriff turning heel and transforming into a werewolf 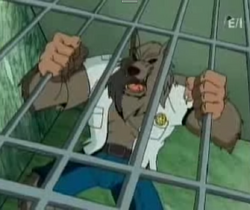 Add a photo to this gallery

Retrieved from "https://werewolf.fandom.com/wiki/Sheriff_(Archie%27s_Weird_Mysteries)?oldid=6744"
Community content is available under CC-BY-SA unless otherwise noted.