Marika Hackman is a singer who portrayed a villainous female werewolf in her music video, "Animal Fear."

The song is about the darkest depths of the human imagination, and throughout her performance, Marika displays her heel persona by slowly turning into a werewolf, beginning with her claws elongating. Marika continued transforming into a villainess when she revealed her sharp fangs and her ears become pointed. Her werewolf transformation was finally completed when hair appeared on her face and she grew a long, animalistic white mane.

Shortly afterward, Marika turned heel by attacking her bandmates one by one, beginning with Laura Marling. After her vicious attacks, the evil Marika continued to perform, with her lips covered in blood. However, it is all revealed to be part of Marika's imagination, as the video ends with her as a human and her bandmates unharmed and alive. 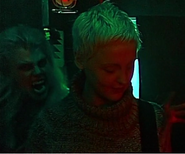 Marika turns heel and attacks Laura
Add a photo to this gallery
Retrieved from "https://werewolf.fandom.com/wiki/Marika_Hackman?oldid=6752"
Community content is available under CC-BY-SA unless otherwise noted.