Christina Riley was a villainous female werewolf from "Werewolf", a third season episode of The Adventures of Superboy.

Christina was the assistant to Professor Canaris, who was attacked by a werewolf in the woods and became one afterwards. She had heard about werewolf attacks taking place in a six-month span and had suspected Canaris as the culprit, only to be attacked by the evil Canaris during her attempt to capture video evidence of his activities. Christina went to the Daily Planet with video evidence of the werewolf sighting, and after voicing her suspicions about Canaris to Clark Kent, the pair tracked Canaris to his office. Canaris turned heel again and shifted into his werewolf form, after which Clark morphed into Superboy and fought against the evil professor.

Christina disappeared during the melee, but unbeknownst to Clark, Christina turned heel and transformed into a werewolf; killing an unknown victim afterwards. Christina wanted Canaris killed hoping that her curse would be lifted, and he was killed during his fight with Superboy. Believing that her werewolf curse was lifted, Christina went on a date with Clark, only to see hair on her hands when the full moon appeared. She ran off to the restroom, where she saw more hair on her face, and rushed to a stall to complete her transformation. Christina turned villainous once again and went on a rampage in her werewolf form. Superboy enters and fights the evil Werewolf Christina, and later learns her true identity. Christina runs off, but Superboy powers down and follows her. Clark attempted to get through to Christina, but she lunges after him right before she is shot and killed by TJ, finally freeing her from her curse. 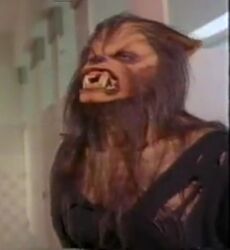 Christina in her villainous werewolf form 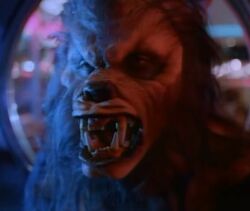 Christina after her heel turn
Community content is available under CC-BY-SA unless otherwise noted.