Anton Weber was a villainous werewolf from the 1988 film, Waxwork.

Anton Weber appeared in one of the wax museum's pocket worlds, which Tony enters, leading to an encounter. The man referred to Tony as Jack, and warned him to leave before the full moon rises, giving the indication that he is a werewolf. Not understanding what he had walked into, Tony simply leaves to gather firewood, while venting over his current situation.

All the while, Anton began his transformation while Tony was chopping the wood; as his claws began to protrude as the full moon was shown in the night sky, after which Anton dug his claws into the wooden table. Anton began turning heel during his transformation, doing so by giving an evil glance at Tony's direction; revealing that Tony was Anton's intended victim.

After Tony returns to the cabin, Anton turned heel and emerged as a villainous werewolf, while later attacking and biting Tony. The werewolf was later encountered by a hunter and his young assistant, who attempted to distract the creature, only for the evil Anton to kill the assistant. Anton ended up shot and killed by the hunter; while Tony, as a result of Anton's attack, turned heel and became an evil werewolf himself. 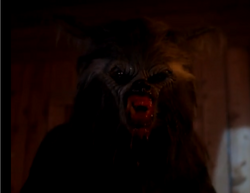 Anton as an evil werewolf
Add a photo to this gallery
Retrieved from "https://werewolf.fandom.com/wiki/Anton_Weber?oldid=6787"
Community content is available under CC-BY-SA unless otherwise noted.