Andrew Rodanthe was a villainous werewolf from the 1972 film, Moon of the Wolf.

Andrew Rodanthe was the brother of Louise Rodanthe, and they were part of a family that was considered royalty in the small Louisiana Bayou town. The town was under siege, as various murders had been committed, with the victims including a young woman and Sheriff Whitaker's deputy. Andrew became Whitaker's new deputy at the film's midpoint, and he was later shown in the hospital informing Whitaker about his sudden attacks of malaria.

Another patient was the father of the female victim, who kept saying "Loug garoug," a French term that was deemed incoherent. During Whitaker and Louise's encounter, the latter figured out that what was really being said was "Loup garou," which is French for "Werewolf," revealing the true culprit behind the murders.

As Louise stated to Whitaker, the warning also stated that Louise would be the werewolf's next victim. Meanwhile, Andrew began turning heel when his right hand was shown being covered with hair, revealing himself as the werewolf. After his transformation. Andrew attacked one of the doctors and before escaping through the window, and howling, cementing Andrew's heel turn in the process.

The next day, a manhunt was planned regarding Andrew, and Louise later revealed that Andrew's lycanthropy was hereditary, as their grandfather had also complained of sickness, when he was actually a werewolf. The film's climax saw Louise at her home later that evening; all the while, Andrew turned heel again and shifted into his werewolf persona as he pursued his sister. Louise had captured her brother in a burning barn and returned to the house believing that Andrew had perished. However, the evil Werewolf Andrew survived the fire, with Louise coming to the realization after hearing a loud howl. Andrew returned to the house to go after Louise, who fired silver bullets at Andrew, killing him instantly. 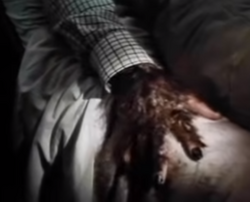 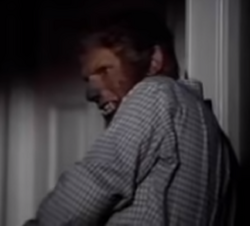